Bitcoin has been coming up a lot lately. In fact, this week I was talking with a good friend and he asked me my opinion on whether he should be investing in Bitcoin.

Since I have been getting roughly twenty emails per day about Bitcoin for the last few months, it is a reasonable indication that something is going on.

Therefore, this week I want to give you my thoughts and some comments from industry experts to give you a better understanding of the Bitcoin or Cryptocurrency phenomenon.

What is Bitcoin or a Cryptocurrency?

According to wiki, Bitcoin is a decentralized digital currency that enables instant payments to anyone, anywhere in the world. 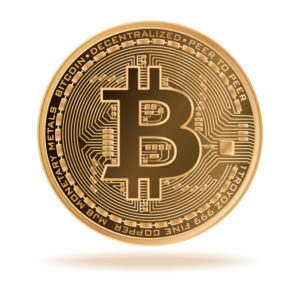 Bitcoin uses peer-to-peer (person to person) technology to operate with no central authority: transaction management and money issuance are carried out collectively by the network.

The technology, originally created by Satoshi Nakamoto, has a limit of 21 million bitcoins. When this limit is reached, no more can be created, although they can be broken down into very small lots.

There is a process called ‘bitcoin mining’ that creates the bitcoins.

How this is done is beyond the scope of this blog, but let me say that it is getting harder and harder to create a bitcoin.

When bitcoin first started it was possible for you to create a bitcoin on your home computer.

Now it requires computers that have so much processing power and require significant electricity to run. Special data centres in countries where electricity is cheap are being set up specifically to create bitcoin.

In fact, the technology behind bitcoin is designed to limit the number created each year to roughly half that created the previous year.

So in short, bitcoin is a form of currency that is becoming more and more accepted in financial transactions.

The theory behind the introduction of bitcoin relates to the control of currency by governments and central banks.

Due to the manipulation, ‘people’ have been looking for other ways to exchange value…

…and to make this exchange without the intervention or need for banks and the fees that they take on each transaction.

Soaring government debt in most western countries, especially the US, is causing their home currencies to lose value.

If you listen to the doomsayers, they will argue that the US dollar is heading for zero value.

I don’t buy into that theory, but you never know, there are no guarantees.

Cryptocurrencies such as bitcoin on the other hand are controlled by the people, don’t require a bank, are not regulated by governments and to date operate in a ‘unhackable’ environment.

Bitcoin for some has become a safety play.

It is no doubt where we are headed, digital currency will become the future.

With the rise in popularity of bitcoin and other cryptocurrencies, it has now become possible to trade or invest in bitcoin.

This is where it starts to get scary…

There are stories of people who either created or bought bitcoin when it was as cheap as 5 cents that are now multi-millionaires.

Why is that you ask?

Well, below is a chart of the price history of bitcoin. At the time of writing this post, one bitcoin is now worth $USD8,075. 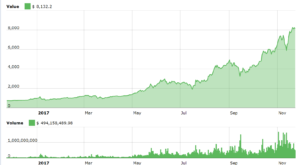 You can see why there is a lot of hype.

The headlines in all the emails that I get are enticing…

…and there for me is the first red flag.

When I start getting spam emails about investing in something, the risk radar rises quickly.

Right now, bitcoin is growing in value at outrageous rates…

That type of return is tempting to anybody, I totally get that, BUT!

Yes there is a but…

Bitcoin, as Robert Kiyosaki recently posted on his Facebook page, is a ‘trendy’ investment.

And for me, trendy isn’t high on the decision tree for what to invest in, especially if you are just getting started in your wealth creation journey.

What Should You Do?

Despite rising so sharply in the last 12 months, bitcoin has had periods where it has fallen dramatically.

Financial markets are so large, and governments and banks are not going to let their control decline without a fight…

Recently countries have started to implement regulation on bitcoin.

Morocco for example has banned the use of bitcoin, and Iran’s finance minister suggested regulation was likely…

…and then there was David Gledhill of DBS, one of Asia’s largest banks, who recently said: “We see bitcoin as a bit of a Ponzi scheme”.

A ponzi scheme is defined as a form of fraud in which belief in the success of a non-existent enterprise is fostered by the payment of quick returns to the first investors from money invested by later investors. 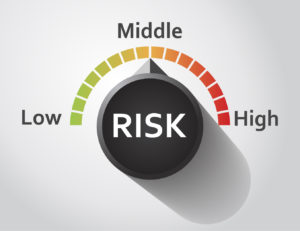 It is for this reason that I see volatility in bitcoin until it becomes mainstream, and we are not there yet.

Until then, I will be sitting out of bitcoin and cryptocurrencies.

Does that mean I am giving up the chance to make outrageous returns, possibly…

But, the risks for me are too high at this stage to include it in my investing strategies.

The alternative remains property, stocks and cash based assets such as bonds, term deposits and even gold.

There will no doubt be critics to this view, which is fine. However, I prefer to coach people how to control their money in assets that have better defined risk profiles.

At some point my opinion will change, and sure it may have cost me the opportunity to invest at far better prices…

However, I will invest with the knowledge of more history, better risk profile and some surety of the sustainability of bitcoin.

Let me know what you think about the bitcoin story, leave a comment below and share your thoughts.